June 25, 2019 – Ms. Geeta Varshneya has joined SRGS Greater Noida as Head of School.
She brings with her enormous experience and expertise. 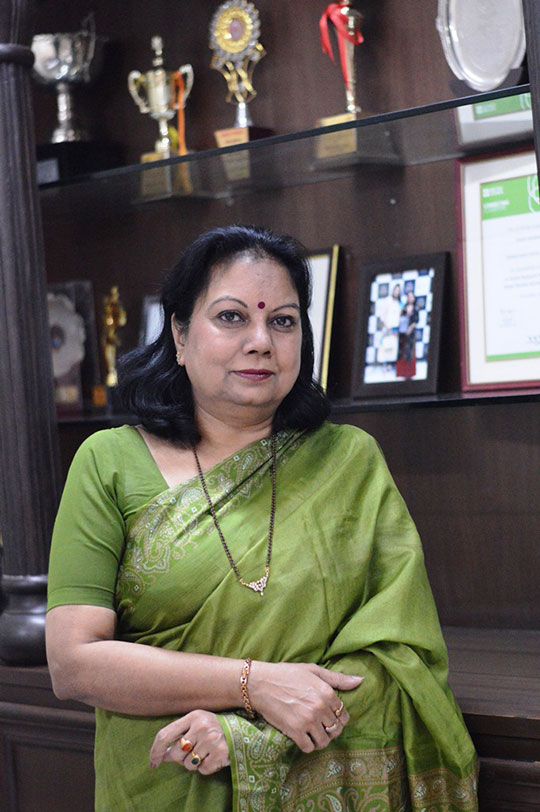 Ms. Geeta Varshneya has joined us as Head of Shri Ram Global School, Greater Noida West. She has been in School administration now for 19 years. She has attended the best of educational institutions and has made her mark in the same - Summer Fields School, New Delhi; Lady Shri Ram College; Delhi School of Economics; SNDT Women’s Univ.; DNV; Princeton- U.S.A.; Queens Univ. Canada.

She was Education Director at Khaitan Public School, Sahibabad and Principal of CLG World School, Moradabad and DPSG International earlier. Her innovations and the progress chart in school education has been noteworthy. Specially, in Creating and improving Systems, Curriculum Planning, School Audit, Teacher Motivation and Training, including training for Mentor-Teachers. Her experiments in Differential Teaching have fructified into excellent Academic Results (Boards as well as NTSE, Olympiads, IITJEE etc.).

Her model of school ICOMS has been picked up by DNV for their international training program. Her case study on School Audit (undertaken for Queens University, Kingston, Canada) has given her the advantage of looking objectively at the ‘The Big Picture’.

She has been successful in combining the ‘Achievement’ and ‘Ability’ assessment of school children and has devised and implemented measurable rubrics for the same.

During her tenure she is the recipient of many prestigious awards like Global Teacher Accreditation Award by The British Council, Lifetime contribution for the cause of Education by Mewar Group of Institutions, Best District Principal Award from Science Olympiad Foundation for 2016-17, National Leadership Award in Thought Leadership in Co-curricular Education in School 2019 by ScoolStars to name a few.

She believes that generally human beings want to - do good work and be recognized for the same. This positive approach has helped her in creating successful teams.

June 29, 2019 – The Government of India extended the last date for giving suggestions and deliberations on the Draft New Education Policy till 31st July 2019. You can read the draft at:https://www.prsindia.org/report-summaries/draft-national-education-policy-2019 . All stakeholders need to participate in this discussion. We @SRGS are compiling recommendations for the same. Send your valuable suggestions to us at: info@srgsnoida.com or directly send them to Ministry of HRD at: https://mygov.in/task/national-education-policy-2019/


Maths Week:
Students at SRGS greater Noida west got an opportunity to demonstrate their numerical and calculative skills as maths week was celebrated between the last week of November and 1st week of December. A maths quiz was held as well as various mental math activities which allowed the students to put on their thinking caps and calculate the answers correctly. During the week, a maths riddle was also held which tickled the brains of not only the young ones but also their teachers. The young minds were also given ample time and space to explore the various activities in the Math Lab using the different tools by Jodo Gyan. It was an interesting week for the staff of SSRGS as they attended Jodo Gyan Math workshops in New Delhi to enhance their own skills and make learning fun for students which enables them to develop both their mental and cognitive skills.


Sports Day Brief 2-12-2019
Shri Ram Global School, Greater Noida West celebrated its first sports day the 2nd of December 2019.There were a plethora of interesting events where every child got a chance to participate. The décor of the sports field was appropriate for the event as there were displays of famous sports-persons with their thoughts on sporting events and character building. There were yoga and taekwondo demonstrations, skating competition, circuit race, sack and three- legged race for the primary and middle school.
For the pre-primary events like lemon race and sack race, zig-zag hurdle and hoop race, running with the ball and even a chocolate eating race were held.
In the days stepping up-to the grand finale, the school held intra- school indoor sports competitions in chess and carom. These indoor sports give students a chance to demonstrate their mental and time management skills beyond the physical realms of the sports field. The meet was followed by a running race for both the esteemed staff as well as the support staff of the institutions and prize distribution to conclude


Science week
Science week with various experiments and demonstrations was celebrated from 23rd November 2020 until 27th November 2020 from grades 3 to 8. Various experiments like self-inflating balloons, a presentation on the journey of food, experiments on the demonstration of liquids and making of a first aid box. Biographies of famous scientists were also presented by the students.
On 27th November we had a special assembly on the Birth Anniversary of Guru Nanak Dev Ji, the Founding Father of the Sikh Religion -a number of interesting performances about the life, works and teachings of Guru Nanak Dev Ji were showcased by the students in the form of dances, shabad and skits.
On the 27th of November again, we had another assembly celebrating the American harvest festival of Thanksgiving with a special prayer, poetry recitation and dance performance by the students capturing the essence of Thanksgiving.


At SRGS, in the beginning of February until 16th of February 2021, the school had organised a “Joy of Giving Drive”, where dry rations such as flour (Atta), rice, pulses were raise for the Art of Living Foundation Roti Bank in aid of the leprosy, T.B and H.I.V centres being looked after by the foundation. We also had good results for the G.K Olympiad conducted in the district. The results were amazing and this was the first G.K Olympiad held in the school. We had 18 in the top 500 zonal ranks in the district and one of our students in the top 100 international ranks, Samarth earned the top 53 in the international ranking and achieved the zonal rank of 34, another student Archismaan also came in the ranking of the top 150 at 137 both these have received Gold medals as well as certificates of participation in the Olympiad .We also had students participate in the Salvation Tree School competition and ARADHYA SINGH OF GRADE 2B WON THE THIRD PRIZE IN SALVATION TREE SCHOOL IN THE CATEGORY OF "COLOUR MY WORLD."

The school has also started a blog where news and ideas are shared weekly. Do have a look @our blog https://srgsnoida.in/ 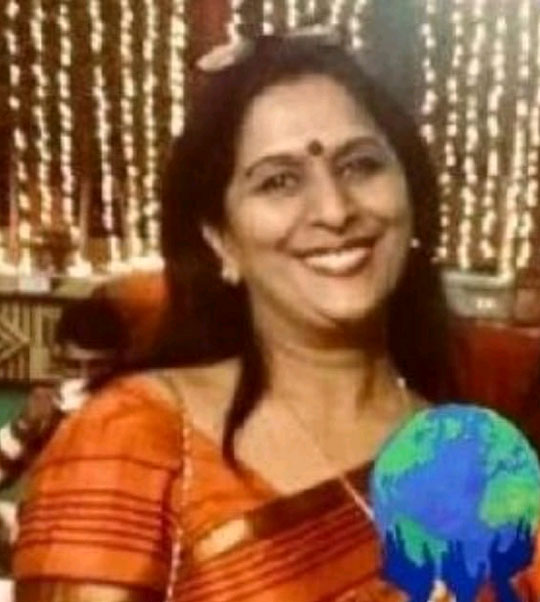 Mrs. Sabita Seth has been promoted as Principal of Shri Ram Global School. She joined office from 1st April 2021. We are blessed to have such a caring and experienced persona with us.

A moment of pride for the Shri Ram Global School Greater Noida West as it was ranked the 3rd Best School in Greater Noida by the Education World Magazine, after just one year of its existence. 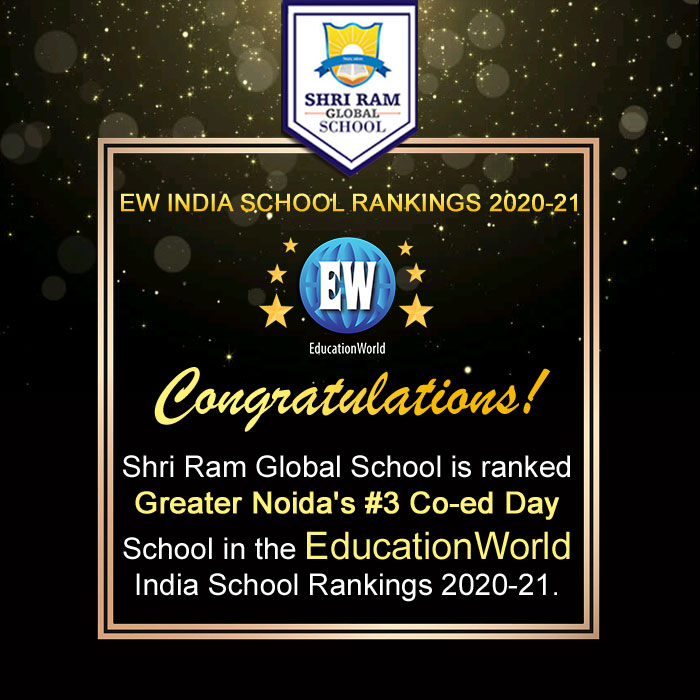 Children’s Day: Children’s day was celebrated to honour Pt. Jawaharlal Nehru, India’s First Prime Minister with a Special Assembly throwing light on the life and works of Chacha Nehru ramp the students of Classes 7 &8 brought the zing into the children’s day celebrations with a ramp walk the video of which is available on our Facebook Page Click here...

Diwali Week: A Special Assembly week to celebrate the festival of lights was conducted on 11 and 12th of November where all the 57 students of Class 1 rendered speeches and dialogues in full costume.Pictures of which are attached. 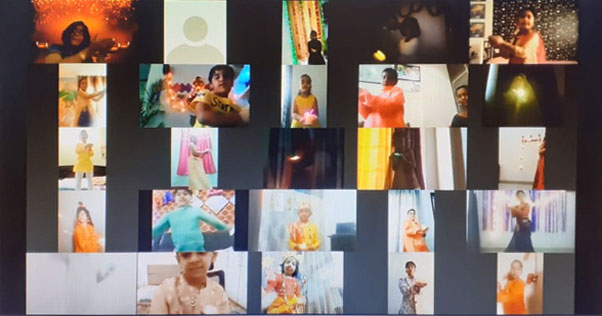